Whether it’s Power Mining Pool today or Bitconnect yesterday, the crypto space is festering with parasitic scams and opportunistic swindlers. The conditions are ripe for them and there’s money to be made. 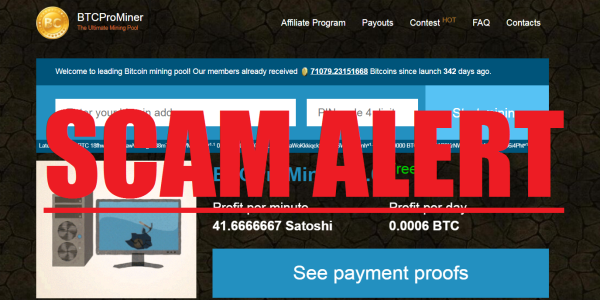 Among the dangers, Bitcoin mining scams are a tough one to identify and parting the good from the nasty can be tricky. Mining scams are wrapped up in an already technically demanding task of Bitcoin mining. They are billed as a consumer-friendly method for building exposure to Bitcoin mining, and when run like this, they really do provide value for investors looking to diversify.

Legit Bitcoin cloud mining pools are too often buried in search results and outranked by throngs of fly-by-night operations. Finding the legit pools can be a tall order and require sifting through Reddit posts and Bitcointalk forum entries. With that said, there are legit mining operations out there. As always, do your own research and stay skeptical as we settle and develop this wild frontier. For now, let’s take a look at what a crypto mining scam looks like to hopefully better prepare us to identify the key red flags.

A cloud mining pool is the most hands-off version of crypto mining you can get. They allow a participant to rent or lease hashing power not directly owned by themselves. The rented hashing power is then pooled and paid out proportionally to the members (after fees and operational costs).

Why pool at all? In short, block rewards become more difficult to obtain as overall hashing power of a particular blockchain increase. Take Bitcoin as an example. There was a time in Bitcoin mining when a standard CPU could mine whole blocks itself. Gone are those days. Bitcoin mining is now big business with plenty of stakeholders leveraging their resources into the security of the blockchain. Miners with serious hashing power make it improbable for small miners to reasonably expect block rewards. Their hashing power is just not enough to compete.

The solution: gather together all these smaller players and pool their hashing power. Miners in a pool no longer compete for blocks of their own, instead, they work together and proportionally share the booty.

It’s theft, let’s just clear that up. If you’re in a Ponzi scheme you are either being robbed or doing the robbing yourself. A typical Ponzi scheme involves enticing participants to invest their money into a fund or investment strategy that has seemingly guaranteed returns. In reality, and with variation, the returns are not gained by real-world trading or superior business acumen. Conversely, new investments to the funds are distributed around existing investors and represented as market returns.

Case in point; “A New York federal court has ordered cryptocurrency hedge fund Gelfman Blueprint, Inc. (GBI) and its CEO Nicholas Gelfman to pay over $2.5 million for operating a fraudulent Ponzi scheme, according to an official announcement published Oct. 18. GBI is a New York-based corporation and denominated Bitcoin (BTC) hedge fund incorporated in 2014. As stated on the company’s website, by 2015 it had 85 customers and 2,367 BTC under management. The order is the continuation of the initial anti-fraud enforcement action filed by the U.S. Commodity Futures Trading Commission (CFTC) against GBI in September 2017. The CFTC charged GBI for allegedly running a Ponzi scheme from 2014 to 2016, telling investors that it had developed a computer algorithm called “Jigsaw” which allowed for substantial returns through a commodity fund. In reality, the entire scheme was a fraud” (Ana Alexandre, Cointelegraph.com, 10/19/18).

Keep in mind that Ponzi schemes thrive in times of economic expansion and speculative bubbles. Capturing collective optimism is pivotal to its success. Bitconnect is a choice example of the market fervor getting the best of investors.

Identifying the Red Flags of a Cloud Mining Ponzi Scheme

Firstly, the duck test. If it looks like a duck, swims like a duck, and quacks like a duck, then it probably is a duck. The duck test isn’t scientific by any standard but can be used to leverage your gut feeling to identify early warning signs. Ponzi schemes, whether in Wall Street, Main Street or Bitcoin mining pools, all share very common characteristics. If the opportunity you’re looking at is checking off the same boxes that previous Ponzi schemes had, it’s probably a duck.

Let’s take a look at some criteria or common characteristics of Bitcoin cloud mining Ponzi schemes.

**Much appreciation to Puppet on the BitcoinTalk forum for their work on this template to review Bitcoin cloud mining operations. Until this type of vetting is part of the investor process, crowd-sourced community led investigation is paramount.**

If any of these red flags are present in the cloud mining business than take a moment and consider why.

Power Mining Pool was a typical Bitcoin mining pool Ponzi scheme and even included a multi-level marketing (MLM) styled referral system. Looking back it is a lot easier now to see the red flags that were present then. Hindsight is twenty-twenty. When a company expects you to send them money, but refuses to disclose any information about itself, you’re almost certainly being scammed. A WHOIS checkup shows that PowerMiningPool.com domain was registered on June 27, and the mining pool website launched online on September 4, 2017.

Red Flag #1 Power Mining Pool didn’t have a public mining address and didn’t allow for mining outside their own pool.

Red Flag #2 No endorsement or sign of approval from hardware suppliers. Nothing to be found on Reddit, Telegram, BitcoinTalk, and so on.

Red Flag #3 A serious lack of informative images. An archive of the Power Mining Pool shows a website riddled with stock images and vague copywriting. In addition to the generic images, there is a video that provides no additional insight into the company.

Red Flag #4 No limits to how much you can invest. Power Mining Pool sold hashing power in the form of shares, which any investor could purchase without limit. Shares would not only be your claim to the guaranteed returns but also provide you with more ability to climb the ranks of the MLM reward system.

Red Flag #5 From Associate to President Millionaire, members could climb the ranks by both acquiring new shares in the pool and successfully referring new members. At each new rank in membership, you received bonuses and higher returns. For you to move up in ranks, however, your referrals also needed to move up. Not only do you need to bring in new successful members, but your referrals do too. Sound familiar?

Red Flag #6 The founders of Power Mining Pool are brothers and live in central Europe. And that’s all the information available. Searching their names, Andrew and Mike Conti, is about as helpful as the caricatures of themselves on their about page. Additionally, a WHOIS search of the company’s domain shows the admin contacts hidden behind a domain name privacy service.

Red Flag #7 After the cease and desist, Power Mining Pool has up and left with members’ principal investments. Initially, there were accounts of members receiving their daily mining profits as promised. However, it’s common for early adopters of Ponzi schemes to see earnings while their principal investments are siphoned off.

The code is what makes the cryptocurrency work, and most legitimate cryptocurrency teams will make their codes ‘open source’. This means it is published openly, so anyone can read it, edit it, and check it is what the founders say it is. Of course, just because you can’t read the code yourself doesn’t mean not being able to see it is OK. If a cryptocurrency team is keeping their code secret, it should set off alarm bells.  Unless they have validated I.P., what are they trying to hide, but even then they would have long legal paperwork and patient documents they could show…..

Just because red flags are present doesn’t always mean you have identified a scam. They are early warning signs and alarms telling us to look a little deeper, investigate further, and remain skeptical. Questions and suspicions are not inherently dangerous themselves but ignoring them is. Power Mining Pool was peppered with reasons to raise concern and seek clarity. The answers provided to these questions should support unique technological offerings, business savvy, and this should all be logically connected. If operators don’t directly answer most of these questions see if they have other commonalities with know crypto scams as it may be another example in a long line of Bitcoin cloud mining Ponzi schemes. BitClub Network, HashOcean, Coinmulitplier Club, MinersLab, and Bitcoin Cloud Services are just a handful of other examples. Unscrupulous operators are swindling and cheating people out of their money. If you see reasons to be concerned, then share it with the community, ask the operators for clarity, and be cautious. Don’t keep it a secret.