OpenStack was founded by Rackspace Hosting and NASA in 2011. Since then it has become a global collaboration of developers and cloud computing technologists creating a universal open source python based cloud computing IaaS (infrastructure-as-a-service) platform for public and private clouds. OpenStack aims to deliver solutions for all types of clouds by being easy to implement, massively scalable, and by having lots of features – all managed through a dashboard that gives administrators control while empowering users to provision resources through a web interface (Fig. 1).

Over the last three years OpenStack has been deployed at about 10% of the Fortune 100 and has become a niche play mostly for public cloud providers. Today these companies see a range of growing use cases from running simple web servers to using hundreds of cores for high-throughput computing. Other benefits include more secure servers, segregated environment infrastructure for research and deployment based projects, and outsourcing of infrastructure to reduce risk and cost. Cloud services like Google Compute Engine, Amazon Web Services (AWS), and Microsoft Azure are proprietary platforms that automatically lock users into their platform while the benefit of OpenStack is that they do not.

OpenStack just had its 13th major release with the 14th due late this year. They have over 10,000 community members and over 1,000 active code contributors. Customers can expect new enhancements in major releases every six months for the foreseeable future. AT&T recently committed to 500,000 OpenStack nodes between now and 2020. Volkswagen has committed to deploy the world’s largest OpenStack network. Verizon, Walmart, and NASA use it; while Intel has been a power user and collaborator for some time (Fig. 3.). 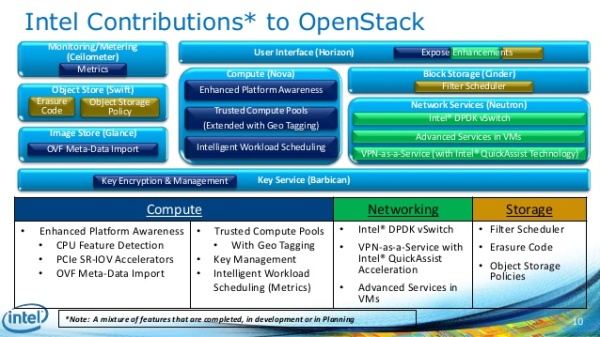 Locally Target has three OpenStack clusters and 120 server nodes in total. It’s likely to grow to 360 nodes this year. FICO has eradicated all but a few VMware (virtual machine) servers. Thomson-Reuters is in the process of deploying 500 servers of OpenStack. Digital River has said “no” to their VMware ELA (enterprise license agreement) and will replace 600 VMware servers and all of their Cisco switching with OpenStack and software-defined networking in the next 24 months with an estimated $6,000,000 in software savings. Best Buy and 3M also have active OpenStack deployments in progress. OpenStack is the fastest growing open source project on the planet and is likely to inspire new competitors.With this track record many pundits and users project very high adoption in the Fortune 100 within the next five years.

Why implement OpenStack? It saves and makes companies money by the wheelbarrow full. Through lower software, hardware, operational labor costs and faster time to market with more innovation through automation. It also provide risk reduction via virtual segregation, and offers an unlocked platform unlike most of the establishment competition as noted above. But companies need help. They need to understand the costs and the risks involved in a deployment.

To learn more about how your company can innovate and save with OpenStack reach out to Storm Enterprises, a noteworthy and growing MN based implementation consultancy for this and related technologies.